skip to main | skip to sidebar

I Believe In Winnie the Pooh.

I wrote this for an English assignment. . . it's a a few words beyond the limit, but I really couldn't care less. (:

***
When it comes time for me to spread my wings and flutter off into the world of adulthood and independence, the one life philosophy I will always take with me is this: you're never too old to watch Winnie the Pooh.

They say we're happiest as children. And although I may still fall into the "child" category, I definitely agree with that statement, and I feel it every day.

I go to an early college high school, so for roughly six hours a day, five days a week, I'm expected to leap out of my immature, fifteen-year-old body, pretend that my frontal lobe is actually developed, and behave like a grown-up. For the most part, that means acting mature, respecting my surroundings, not shouting obscenities to my friends across campus, and saying "Please" and "Thank you" to the lady in administration. The proverbial I'm-your-teacher-and-I'm-going-to-walk-you-through-life-and-keep-filling-your-glass-to-make-sure-you're-okay ship has sailed, because to stay on it would be childish. And sophisticated adults do not act childish.

Sometimes it can be overwhelming, and many times I've stopped and wondered if maybe I grew up a little too fast, if I somehow missed all the things I was supposed to see along the way. It's during those times that I take a step back and say "forget the textbooks and the studying and the college professors. Forget who I'm supposed to be. I'm taking out the I-Touch and watching Winnie the Pooh on YouTube!"

I believe that life doesn't always have to mean moving forward. I was raised on Winnie the Pooh; it was my foundation as a child. There are so many lessons about life, love, and strength in those stories that I think we all tend to forget as we grow older; things like "You’re braver than you believe and stronger than you seem," or "you can't stay in your corner of the forest waiting for others to come to you. You have to go to them sometimes." When I need advice or reassurance, I don't look to Gandhi or Oprah to give it to me; I look to Winnie the Pooh.

He brings out the ridiculousness of life; that's the greatest thing about it. Through Pooh Bear's wisdom, I've learned that life doesn't have to be taken seriously all the time. Sometimes I look at adults and I notice the lines on their faces, the worn-out expressions they carry. They're tired, unhappy; they've lost sight of the child within. I believe that just because you wear a suit and tie doesn't mean you can't play legos or wear a crazy costume on Halloween; that just because you're a lawyer or a doctor or the headmaster of a prestigious school doesn't mean you should hide your inner Pooh Bear.

I may be ready to embark on the journey to adulthood, but Winnie the Pooh is a piece of my childhood that I will always hold on to; because there is something beautiful in remembering that, "wherever they go, and whatever happens to them on the way, in that enchanted place on the top of the forest, a little boy and his Bear will always be playing." 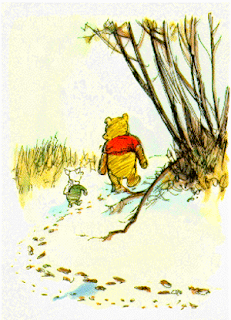 Labels: childhood, english class, this i believe, winnie the pooh

We're Only as Small as the World Will Make Us Seem.

If there's anything I've learned in my fifteen years of being alive, it's that knowing the answer to everything isn't always as rewarding as genuine curiosity.

Tonight was one of those rare nights where the fog had drifted off and the sky was so clear that you could see the twinkle of every individual star within eye distance, like fine, bright points painted upon a blank black canvas. It was a night that made me realize, as much as I may hate this town, how lucky I am to be away from the big cities, where the flashing lights and glamorous buildings, and all the meaningless fabrications block out the things we're really supposed to see; the little bits of perfect that give us meaning within a series of worlds whose combined efforts make us seem too small to mean anything at all.

And as I drove home in the back seat of the car, enveloped by this brilliant array of stars, I thought about all the things I already know, the answers I already have; I know that the "twinkle" of each star is caused by the constant moving and shifting of the Earth's atmosphere. I know that the closest star to our planet is 4.3 light years away. I know that when small stars die, their remnants become dwarf stars and planetary nebulae, and that big stars will supernova and leave behind neutron stars or, if dense enough, black holes; I know that some of the very stars I saw tonight could have already burned out some hundred years ago. At one point, I looked ahead and saw an especially large, bright star and could determine, based on it's color, that it was red shifting, moving away from us.

But as informed as I may be about the basic concepts of Astronomy, there's something strangely comforting about realizing that there are still things out there that can't be explained. Nobody knows how we got here, or why we're here, or how everything that exists works or why it works that way, but that's how it's supposed to be.

We are because we are, because that's just how it happened.

People are intrigued by mystery; it's what gives things significance. If we held the key that unlocked all of life's mysteries and let us leap into the unknown, we would lose the profound sense of curiosity that makes us interested in everything we have. I don't want to lose that; I mean something because, even though I haven't the faintest idea how or why it happened, I'm here. I still exist.

*Kendra* =)
oh, hello, my name is kendra - hopeless introvert and lover of words, music, sign language, and people watching. i don't like to put myself in a box, although they are by far the cutest geometric shape.