skip to main | skip to sidebar

"I disapprove of what you say, but I will defend to the death your right to say it."

This is why I love Boston Legal.

Stick it!
- Watch more Videos at Vodpod.
I rarely ever get chills when I listen to people talk. For whatever reason, the spoken word fails to trigger an emotional response from me, with the possible exception of Barack Obama's inauguration speech. But when Alan Shore stands up to deliver his closing arguments, I am captivated. It's all there; the shivers, the wonder, the admiration, and the profound appreciation for his ability to passionately declare what everyone else is afraid to say.

I am moved by the truth in his words.

Alan Shore's monologue here is a frighteningly accurate synopsis of what is wrong with our country today. Now, I'm not going to make a list or write an in-depth analysis of the flaws in America's policies, because let's face it; I'm 15. I don't understand everything. But what I do understand is that the problems that exist now are not going to get any better unless people start to rise up and get angry about it.

Why does nobody care? That's my question. Why does nobody care? I am appalled by the amount of apathy young people seem to showcase today. Clearly, people are more concerned about how Lindsay Lohan is doing in jail than the war in Iraq; or whether lady gaga is really a hermaphrodite than whether it's right for the government to strategically strip us of our Constitutional freedoms. It sickens me, and I'm tired of it.

I can only hope that one day I will find the courage to be like Alan Shore, and voice my opinions and argue for what is right. Thank you, David Kelley, for creating such an exceptional and intelligent character. I am moved and inspired.
Posted by *Kendra* =) at 3:31 PM 9 comments:

yes my friend, this toast i made is positively glorious.

the book i want to read is in my mom's room at the moment, but she happens to be asleep. go figure. it's been sitting on top of the t.v. in the living room for the past week, and TODAY she decides to move it, and replace it with some absurd flower hair clip my grandmother found at a thrift store. i suppose i could just barge into her room, flick on the light, and start rudely rummaging around for it, but that would likely upset the wiener dog, and irritate my mother to the point where she would sit up and angrily mumble something like, "do you HAVE to have it NOW?" and i'd say something like "YES i need it now, it was in the living room, and you MOVED it when you knew i was reading it."

and then she'd say, in a considerably more irritated fashion "i did NOT move it, i have no idea where it is, so get lost."

then i'd reply with a sensationally witty remark, like "you're FACE can get lost," and i wouldn't get the book back. then on the short journey back to my room, i'd notice it sitting on the couch, in perfectly clear view. that's always how it happens.

like this morning, when i was making hot chocolate and i tried to put the thing that holds the hot water in the fridge. or two minutes later, after i made toast and accidentally put the peanut butter in the fridge when it really belongs in the cabinet above the counter. i make the most fantastic toast in the world. you'd have to be in my head to know why that had anything to do with what i was talking about, but trust me, it's connected.

so needless to say, i'm going to skip breaking into my mother's room, because in the end, it would essentially be useless, regardless of whether or not the book was actually there. which i'm almost certain it is, but i'm probably wrong.

it's The Know-It-All by A.J. Jacobs, by the way, perhaps you've read it. but then again, you probably haven't because, i mean, who actually reads books anymore when there are so many intriguing things to read on the internet, like F My Life and Shit My Dad Says?

oh yeah, and the toilet overflowed this evening, which was somehow my fault even though i had nothing to do with it. all i did was push the handle like i've done a thousand times before, and somehow it decided to explode. just a freak accident, but of course, it was my fault. i just love how that always happens.

was there a point to this blog? ehhhhhhhhh, not really. but hey, who knows, maybe you'll find some sort of secret, profoundly touching, epiphany-evoking message hidden beneath this babbling nonsense. perhaps it even holds the meaning of life. get creative.
Posted by *Kendra* =) at 12:32 AM 3 comments:

Every Day is a Room For Squares Day.

One of the things about being me is that I can never get into anything half-way; if I like something, I have to know everything about it. For example, once I started watching House M.D., within days I could name every character, their roles in the show, and an unhealthy amount of random facts about Hugh Laurie and Jesse Spencer.

Me: OMG! Did you know that Hugh Laurie's a Gemini?! His Birthday is two days before mine!

Me: I know, right? Jesse Spencer's isn't though, his birthday's in February. He's from Melbourne, isn't his accent swell? I wish I had an Australian accent. Did you know he actually dated Jennifer Morisson in real life? But they broke up like, last year or something...

But you get the idea.

First it was Panic! At The Disco, then Marilyn Manson, then House, and Boston Legal. Pretty much every stage of my life can be marked by some sort of obsession.

I also always seem to jump on the bandwagon way after all the hype has gone away; P!ATD split up, Marilyn Manson's old, "disgusting", and past his prime; House is already in its 7th season, and Boston Legal got cancelled. Either that, or everyone I attach myself to is now hated for being a douchebag.

Which brings me to the actual point of this little diatribe. 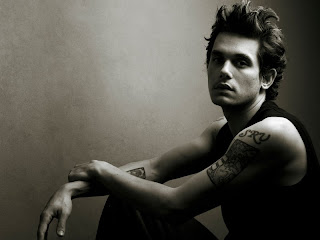 So, I'm big into John Mayer now (actually, I've always been, but more so as of late). Anyways, I'm pretty sure this happened four weeks ago when I was shopping for trashcans at Bed, Bath & Beyond, and happened to stumble upon his framed Rolling Stone cover art that was on display for $39.99 (which I do plan on purchasing, by the way).

But that's not the point.

The point is, he's a colossal douchebag. Allegedly. Because he made a racist comment in an interview with Playboy, and shared a bit too much when asked about his past relationships with women.

I spent roughly $20 of Itunes money on a douchebag.

So now, when it comes to John Mayer, you either love him, or you hate him. Not because of his music or his talent, but because of his image. Yeah, that's stupid in and of itself, but what I love the most about this whole situation is the fact that people are getting so worked up about it. Click on any video devoted to him on YouTube, and you will undoubtedly find a comment section jammed full of heated debates about whether or not he's an arrogant, racist, sex-starved, piece of worthless garbage.

Ex: Bieberfever451: Ehhhmmagaawwwdd, did you hear that jennifer anniston broke up with him because he tweeted too much?

Hauntedtoaster35: ikr? he liek said the n word in playboy too. what a racist douchenozzle.

JM4life: come on guys, he didn't meeaaann it! stop being mayer haterzz, u guyz r just jealous cuz you can't sing liek him.

It's been five months and people are still arguing about it. IT'S MADNESS, I TELL YOU!

The fact that hundreds of people are warring over the Internet because of a thirty-two-year-old guy with a guitar strapped to his back that they've never even met and probably know nothing about kind of makes me want to just laugh at how ridiculous people can be.

Baby sea turtles are being lit on fire because of the oil spill, but y'know, it's no big deal.

But god forbid, John Mayer says the "N" word, and everyone races to their computers to type their useless opinions into all the stupid, 140-300 character limit text boxes they can find as if the rest of the world actually gives a crap about anything they have to say.

It makes me chuckle.
And regardless of whether or not he really is what people make him out to be, I'm still going to waste an absurd amount of money and ipod capacity on John Mayer. Because he makes good music. And is a ridiculous guitar player. And to disregard such an immense talent because of his epic douche status would be silly. (:
Posted by *Kendra* =) at 3:31 PM 4 comments:

*Kendra* =)
oh, hello, my name is kendra - hopeless introvert and lover of words, music, sign language, and people watching. i don't like to put myself in a box, although they are by far the cutest geometric shape.